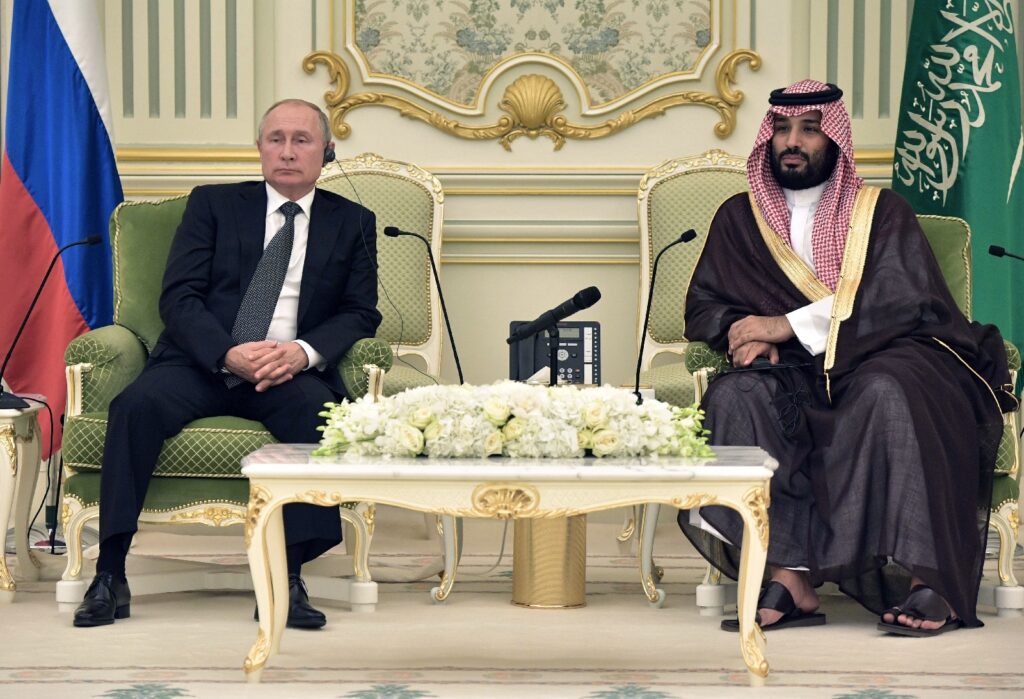 The 2021 tyranny index for oil and gas

by Mark Milke and Lennie Kaplan

This Fact Sheet examines worldwide oil and natural gas production and market share over four decades for countries in three categories: nations (or territories) that are Free, Partly Free, or Not Free. The freedom rankings are from Freedom House, a Washington D.C.-based think tank which has measured and ranked countries and territories by their degree of freedom since 1973.¹ The data on oil and natural gas production are from the U.S. Energy Information Administration (EIA), a U.S. government agency.

The use of tyranny in the title of this Fact Sheet is a nod to the dictionary definition where one categorization of tyranny is ‘oppressive power’ and especially as ‘oppressive power exerted by government.’ In essence, “Not Free” and “tyranny”— while not always interchangeable — overlap enough for our purposes: to give readers a sense of where oil and natural gas production occurs and under what type of regime.

This matters for a variety of reasons. As the data show, there is a shift to higher proportions of oil and gas production to countries that are dictatorial and authoritarian. The result is that the money consumers pay for oil and natural gas is increasingly directed to Not Free regimes that can then use energy revenues to suppress their own people and/or where substantial revenues flow to regime leaders. This is the case in Russia,² Saudi Arabia,³ and Venezuela,⁴ among others.

Also, Not Free regimes can wield significant power over the supply of oil and natural gas exported to vulnerable populations. This occurred in 2009 when Russia cut natural gas supplied to Ukraine in mid-winter over a pricing dispute. There is also potential pressure on governments. A recent example is the concern expressed in Germany over the almost completed Nordstream 2 natural gas pipeline from Russia with its terminus in Germany, and the reality of greater German reliance on Russian natural gas imports.

This concern became acute after the August 2020 poisoning of Russian Opposition leader Alexei Navalny, which German Chancellor Angela Merkel, among others, blamed on the Kremlin. Of note, the head of Germany’s parliamentary committee on foreign affairs, Norbert Röttgen, even urged of cancellation of Nord Stream 2. He argued that “We need to respond with the only language that (Russian President) Putin understands, the language of natural gas.” Meanwhile, Poland’s foreign minister Konrad Szymanski also cited the poisoning as a reason why Nord Stream 2 must be abandoned, arguing that the new natural gas pipeline “will make the European Union economically dependent on Russia and undermine our ability to take decisive steps against this type of malign behavior.”

With that context, we examine comprehensive production data for petroleum and other liquids and dry natural gas (“oil” and “natural gas” for our purposes) from 1980 to 2019. We match up the data from the EIA and Freedom House to track whether the proportion of oil and natural gas controlled, directly or indirectly, by Not Free countries is increasing or decreasing.

For oil comparisons (Figures 1 and 2a and 2b), those countries with more than half-a-million barrels of daily production (based on annual averages) in at least one year between 1980 and 2020 were matched with their Freedom House ranking. Countries with less than 500,000 barrels of daily production were not collectively ranked and fall into the “Not Measured” category. Proportions measured by freedom category thus ranged from 93 to 96 per cent of all oil production depending on the year.

Some observations from the data: 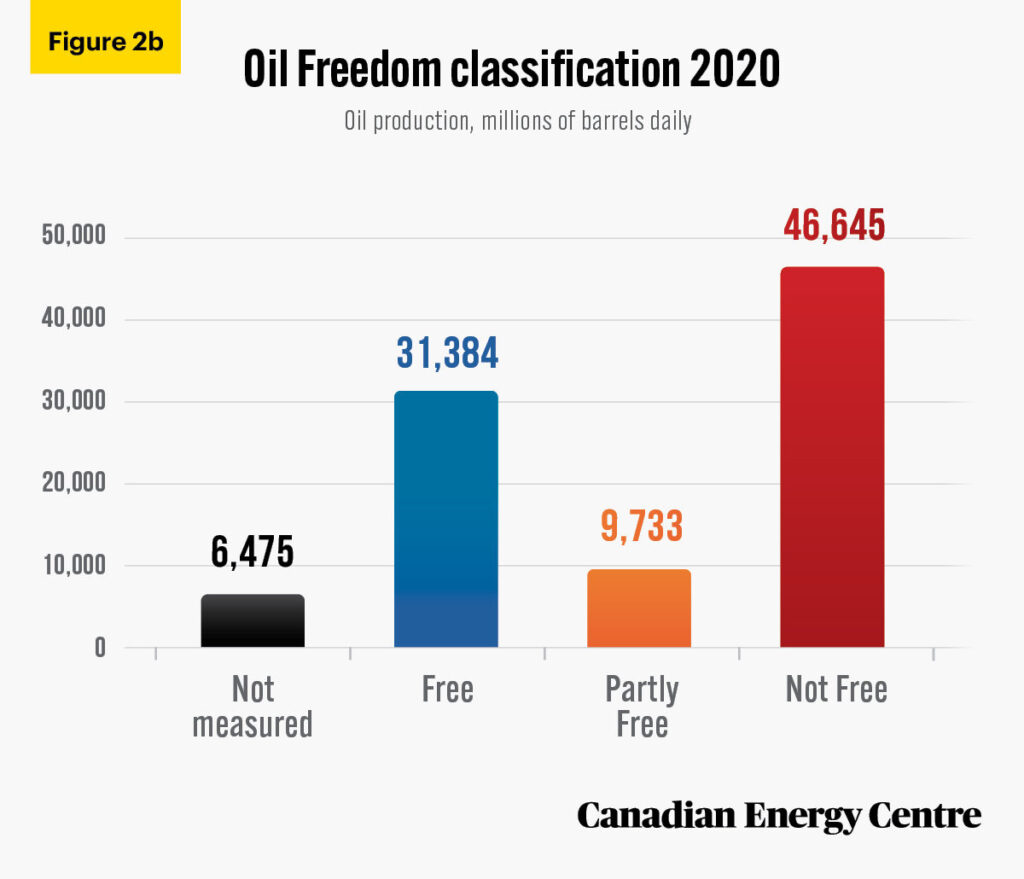 Natural gas 1980-2018: Rising share of production in Not Free countries

For natural gas comparisons, countries with more than 500 million cubic feet per year of production in at least one year between 1980 and 2018 were matched with their Freedom House ranking. Countries with less than 500 million cubic feet per year were not collectively ranked and fall into the “Not Measured” category of all gas production. Proportions measured by freedom category thus ranged from 96 to 97 per cent depending on the year.

Some observations from the data: 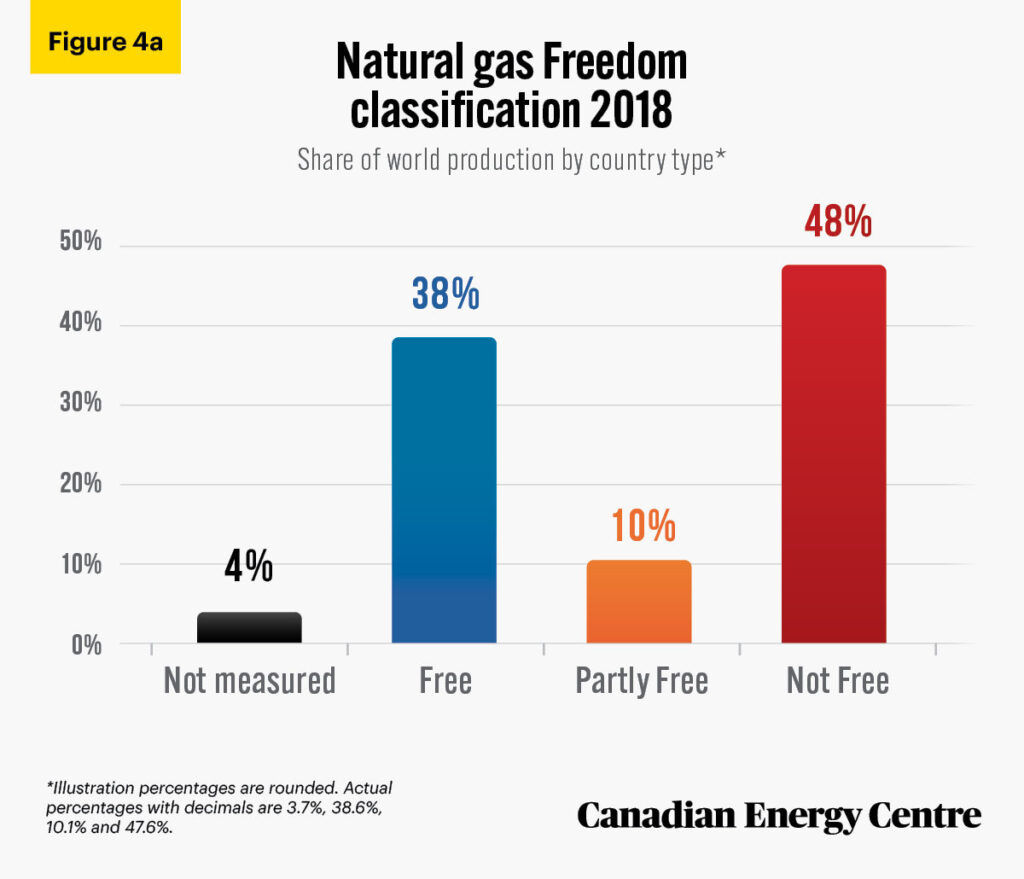 As with the oil index, shares attributed to the three categories have risen or fallen due to both changes in country rankings and also changes in production volumes in specific countries where freedom rankings remain constant. For example:

Summary: 49% of oil and 48% of natural gas production comes from Not Free countries

With the most recent data available, as of 2020, 49 per cent of global oil production comes from nations that Freedom House tracks as Not Free. That compares to a 33 per cent share of oil production in Free and 10 per cent in Partly Free countries.

For natural gas, 48 per cent of global production came from countries characterized as Not Free in 2018, down one per cent from 2017, but was otherwise the highest proportion observed in the last four decades. That was higher than the proportion of production in Free (39 per cent) or Partly Free (10 per cent) nations.

There are limited options for citizens, companies, and governments in democracies in dealing with regimes that order state-owned oil energy companies to flood the market with additional supply or that restrict natural gas exports; in both cases using energy as a geopolitical weapon. However, supply options matter: Countries with limited natural gas suppliers in Europe or in Asia, for example, will always find it more and not less difficult to ally with other democracies on critical matters such as civil rights, a free media, religious freedom, free expression, and other freedoms if their oil and gas supplies are subject to near monopoly influence by the regime in a country that is Not Free.

In the context of debates over oil and gas extraction and exports, it should matter if countries such as Canada, the United States, Australia, Norway and other democracies ranked as Free are able to extract and export more oil and natural gas. Other issues beyond energy and the economy matter, including the environment. However, in a world where a greater share of oil and natural gas production is coming from autocracies, the security of supply and national interest matter in parallel to the economy and the environment. Production statistics are measured in this Fact Sheet for that reason and for consideration by policymakers and the public. Research and data from the Canadian Energy Centre (CEC) is available for public usage under creative commons copyright terms with attribution to the CEC. Attribution and specific restrictions on usage including non-commercial use only and no changes to material should follow guidelines enunciated by Creative Commons here: Attribution-NonCommercial-NoDerivs CC BY-NC-ND.